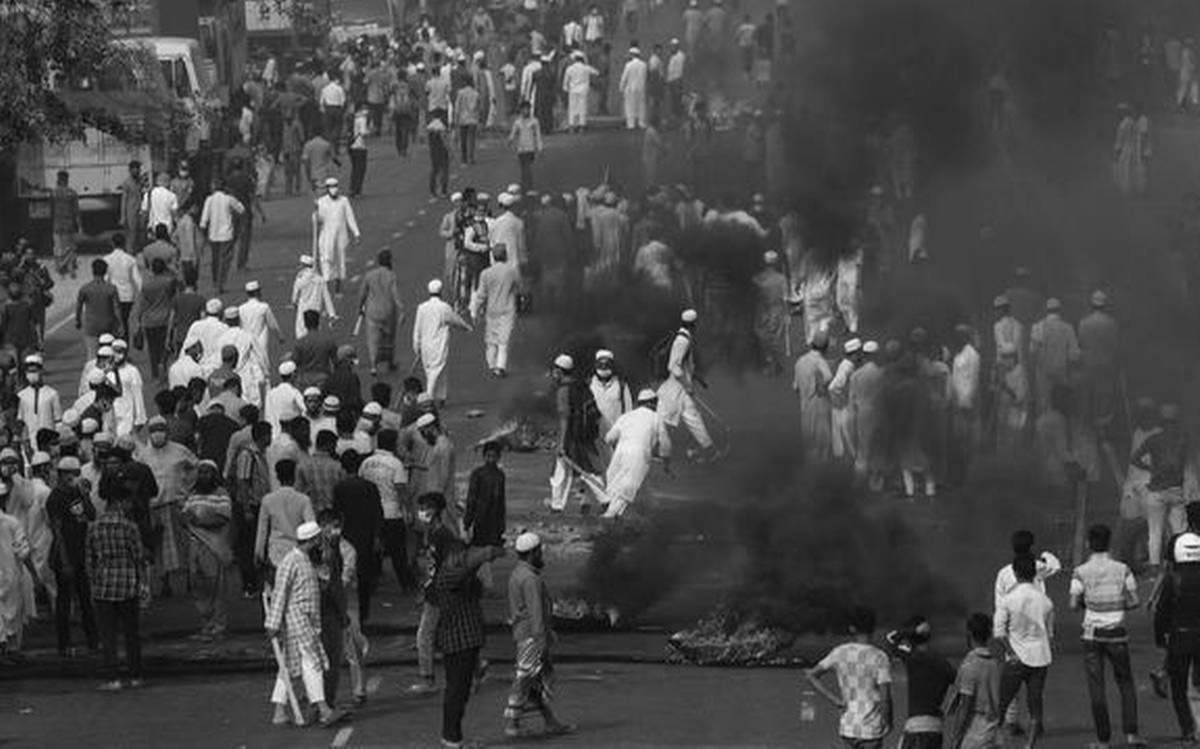 (To be precise, this is not the first time when inhuman persecutions on Hindus on Bangladesh have taken place. It’s nothing but a continuation or succession of atrocious events that would take place till the last Hindu or any other minority remains in Bangladesh. Similar to 2021, Bangladesh flared up against its minority section, Hindus in particular, in large scale in the years of 2013 – 2014 while the small scale is a poignant, regular feature on a daily basis. What’s next then? To have the best answer to this, we would take help of acclaimed intellectual and also veteran journalist Janab Abul Momen. This writing of his had been included in the awe-inspiring document of ‘OUTCRY’, under the aegis of Nikhil Banga Nagarik Sangha, in January, 2014. – The original article was in Bengali)

Even if Hindu persecution has been a regular feature in the realm of Bangladesh ever since 1971 as a sequel to anti-Hindu riots in erstwhile East Pakistan, the recent development in both Baghaichari and Khagrachari raises question of the stance and also obligation of majority Muslim community to the minority Hindu community there. Pakistan was based on two-nation theory and owing to its foundation in a highly partisan and frenzied philosophy, it has failed to have support of the minority community thus far.

Mutual distrust and hatred among Hindus and Muslims, after sharing courtyards for almost ten centuries, got all-time high in the year 1946 and both riots of Kolkata and Noakhali intensified this new (then) saga only. Generally, mutual trust and opinion had been more in rural than urban Bengal but the Noakhali episode despoiled it largely. Due to the partition, 11 lakhs of Hindus left East Pakistan in 1947. The majority of them were persecuted, terrified Hindu refugees albeit three-and-half lakh were rural middle class people, two lakhs of them were well-heeled peasants and workers. During partition, 29 percent of the entire population in then East Bengal (now Bangladesh) comprised minority people but it was found to be 25% during the census in 1951. If the following censuses are analyzed minutely, a steady reduction in minority populace will be witnessed and this declination has led to the present situation – minority population in Bangladesh now amounts to 12 %. Earnest researches can discern that millions of minority people have left the country in the last 60 years. Unfortunately, this trend is yet to end; neither the State nor the society is serious to call it a halt.

A novel notion has come to the fore these days and it is to evaluate riotous situation in Bangladesh with regard to numbers and extent of Hindu-Muslim riots in India. Since India is not a communal country and its jurisprudence has constitutional obligation to retain the Right to Equality, Muslim and other minority groups have opportunities to vie with these catastrophes. Studies proclaim albeit there have been hundreds of Hindu-Muslim riots in the last 60 years in the realm of India, those have not led to expulsion of minority groups – riots in ’47, ’50 and ’64 happen to be exceptions. This can be assessed better if flights from and entrances to Bangladesh are studied. A close eye on societal evolutions in Bangladesh can posit the stronger trend among the two.

Pakistan was not formed on a two-nation theory only; measures adopted by its successive governments proved to be potent enough to smash minority morale. Nehru-Liaqat Pact signed in 1950 pledged to render Right to Equality to minority population in both countries but it was never abided by Pakistani governments. On the contrary, repressive measures were adopted to expel Hindus from Pakistan. Let’s concentrate on a few examples. Two legislations were passed in the Constituent Assembly of Pakistan in 1951 that virtually imperiled properties of minority community in the whole nation. These are – East Bengal Evacuee Property (Restoration of Possession) Act of 1951 and East Bengal Evacuees (Administration of Immovable Property) Act of 1951.

It must be mentioned, Hindu society, thanks to its cordial relation to the British Empire, overshadowed Muslims in almost every aspect. Hindus, naturally, owned more properties than Muslims. The situation in eastern part of Bengal was no different. Partition and execution of abovementioned statute laws simply scourged Hindus and a section of Muslims pounced down on these preys. A new trend to seize Hindu properties by sheer intimidation or force came to the fore.

One facet has got be cleared now. This phenomenon and its burgeoning influence in Bangladesh has become a cause of concern to me for years. Without a shred of doubt, this menacing concept has become ingrained in Bangladeshi society by now leading to pernicious impacts only and unless this is uprooted, any development or progress in our society will remain a dream only.

Hindus, by the active support of State on the whole, have been reduced to second-grade citizens in Bangladesh. Two more legislations were also passed and enacted later to crush Hindu morale utterly and there was indeed a great success in these regard. These two laws are – East Bengal Prevention of Transfer of Property and Removable Documents and Records of 1951; East Pakistan Disturbed Person (Rehabilitation) Ordinance of 1954. As a result, minority Hindus lost their right to sell off properties independently and governmental permission to do the same became indispensable. With the support of Pakistan (Administration of Evacuee Property) Act XII of 1957 and 1959, military ruler Ayub Khan declared election of six distinguished leaders of minority community as unlawful. (EBDO) Hindus realized once more how the whole of Pakistan was vindictive to them. The venomous and prolonged Enemy Property Act was enacted in Pakistan against Hindus as fallout of temporary war between India and Pakistan in 1965. This single act has been active yet and if truth be told, its sinister effect has razed Hindus to the ground. Following the war in 1964 and enactment of this law, migration of Hindus became all-time high. During the Muktijuddha, Hindus were termed as the sole enemy by the Pakistani government, Pakistani army and its accomplices then. No less than 70 lakhs of Hindus took refuge in India, as a result.

It must also be mentioned, whatever the obstacles and premeditated persecutions were, Hindus were connected to mainstream politics and society in the Pakistani regime. They also had the earnest desire to live in Bangladesh without fear and any sort of terrorism. But now they have become despondent of their future. Not Bangladesh has failed to protect them only, status of Hindus remains unchanged here yet – they are still second-graded citizens like the Pakistani regime. Well, I am ready to term the desecration of holy Hindu deities (just after impendence) as a maneuver by pro-Pakistanis to harass the then newly founded and independent government. But what did the State do? Following 1975, Bangladesh was transformed into another edition of Pakistan; not secularism was erased from the constitution or state religion bill was passed only but Vested Property Act was turned into a more brutal form also. Hindus were persecuted once more following the destruction of Babri Masjid in 1989 and fall of Ershad regime in 1990.

Now, whenever partition and following decades are analyzed it gets apparent – neither Pakistan nor Bangladesh has procured minority communities or kept partisanship at bay. Simultaneously, anxieties rise extremely when attempts to seize Hindu properties become genetic.

There is a specific reason behind penning aforesaid anecdotes – the majority community retains a strong indisposition of rising atrocities against the minority community; it has never tried to find out why are minority people being victimized unreasonably leading to their migration and how each such loss makes Bangladesh wretched.  How can a country develop if a definite section of its populace remains in constant fright and continues to have bruises of partition? Is this possible at all? We have begun to pay prices for this disinclination; politics in Bangladesh has become a mere profession and the best tool to acquire properties of others. And thanks to this steady deterioration, criminalism has got the potency.

To better the country, new concepts have to be implemented – it is to create Right to Equality throughout the country; a law that will treat every citizen equally. Poor Muslims have also become victims to reprisals in Baghaichari. Now it’s the time to resolve mounting hostility based on Parbattya Chattagram Agreement instead of inciting these hapless Muslims. But before that the sordid account of minority persecution and rising criminalism among a section of majority community has to be discerned.

We have to accept mistakes and rectify those.