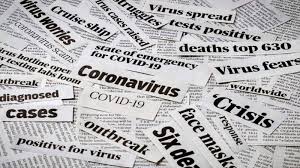 The economic impact of the 2020 corona virus pandemic in India has been largely disruptive and may cause extensive damage in the future. India’s growth in the fourth quarter of the fiscal year 2020 went down to 3.1% according to the Ministry of Statistics. The Chief Economic Adviser to the Government of India  said that this drop is mainly due to the coronavirus pandemic effect on the Indian economy. Notably India had also been witnessing a pre-pandemic slowdown, and according to the World Bank , the current pandemic has “magnified pre-existing risks to India’s economic outlook”.The current economic crisis is a combination of supply side disruptions and  sinking demand. As demand is uplifted through stimulus, supply side disruptions may have to be simultaneously removed so that the two sides may come out of the crisis in sync.

There is an urgent need to reprioritize budgeted expenditures in favor of health-related expenditures including health infrastructure. In terms of rebooting the economy, new manufacturing capacity needs to be attracted in India. which would require additional budgetary allocation. In fact, both revenue and expenditure side estimates of the central and state budgets which were only recently presented in the Parliament and respective legislatures would need to be overhauled. As things begin to normalize, there may be a need to present new full year budgets since the existing budgetary numbers have been rendered irrelevant by the onslaught of the global pandemic.

Multilateral institutions have assessed that the COVID-19 global pandemic will leave the world economy worse off than the 2009 global economic and financial crisis. Its impact may be more comparable with the Great Depression of 1929. The International Monetary Fund (IMF) has projected global GDP to contract by (-) 3% in 2020 with advanced economies (AEs) expected to contract by (-) 6.1% and emerging market and development economies (EMDEs) by (-) 1.1%. Two major EMDEs namely India and China are expected to show a low but positive growth respectively at 1.9% and 1.2% respectively in 2020. Other institutions and rating agencies project the global growth in 2020 to range from (-) 2.7% (Bank of America) to 1.95% (mid-point of range provided by OECD).

The COVID-19 induced economic crisis is quite different from the 2009 global economic and financial crisis in some crucial respects. The roots of the 2009 crisis emanated from the housing market crisis of the US and excessive lending by global financial institutions to households based on poor quality collaterals. The credit markets across the world crashed, leading to a collapse of credit demand across countries. This was a demand-led crisis and it was addressed by individual and coordinated stimulus across the G-20 countries. These countries coordinated their stimulus action by reducing interest rates and by increasing their debt-financed government expenditures. In some of the economies where this was overdone, there was a sharp rise in inflation. The longer-term outcome was an increase in the indebtedness of the whole world. Since the COVID-19 crisis may be deeper than the 2009 crisis, the reliance on fiscal measures would be even larger. In fact, in most developed countries, the interest rates are near zero and any monetary side stimulus may have limited effect. As such, it is the borrowing-based financing of government expenditure which will serve to boost demand in different countries. However, the current crisis is a combination of supply side disruptions and a sinking of demand. As demand is uplifted through stimulus, supply side disruptions may have to be simultaneously removed so that the two sides may come out of the crisis in sync. This calls for a carefully calibrated injection of demand stimulus which should be synchronized with the stages of the exit from the lockdown.

India: slipping into a fall while already on a slide

India’s current growth prospects are highly constrained as it has entered the COVID-19 crisis on the back of an economic downslide. The real GDP growth was estimated at 5% for FY20 as per the earlier CSO release dated 28 February 2020. As more recent information for 4QFY20 becomes available, this estimate may go down significantly. The IMF has projected India’s FY20 growth at 4.2% and its FY21 growth at 1.9%. Other multilateral institutions have projected India’s FY21[1] growth to range between 0.8% (Barclays) to 4% (ADB) with the median growth rate at 2.4%.

Indications highlight the unfolding adverse impact of the COVID-19 pandemic. Growth in goods exports contracted by (-) 34.6% in March 2020, the highest pace of contraction in nearly three decades. Power consumption which was already contracting by (-) 4.0% over the period August 2019-January 2020 further contracted by (-) 7.0% in March 2020. During the first phase of the lockdown period from 22 March 2020 to 4 April 2020, it fell even more sharply by (-) 24.2% indicating a steep fall in economic activity. Retail sales of automobiles contracted to its historic low of (-) 44.95% led by a sharp decline in the sale of passenger vehicles and two-wheelers by (-) 51.0% and (-) 39.83% respectively in March 2020 as per the latest data released by Society of Indian Automobile Manufacturers. Growth in bank credit fell to 6.1% in the fortnight ending 27 March 2020, its lowest level since the fortnight ending 18 August 2017. Growth in bank credit has been falling in each subsequent fortnight since 3 January 2020. Gross tax revenues of the center contracted by (-) 0.8% during April-February FY20 with direct taxes contracting by (-) 3.5% and indirect taxes witnessing a subdued growth of 1.6%. PMI services also contracted to 49.3 in March 2020 from its 85-month high of 57.5 in February 2020.

Fighting our way out: policy stimuli and preparing for the new normal

On the monetary side, the repo rate was reduced to a historic low of 4.4% on 27 March 2020. Numerous liquidity-augmenting and regulatory measures have also been undertaken since then. Liquidity augmenting initiatives include a reduction in the CRR, targeted long-term repos operations (TLTROs), reduction in the reverse repo rate, special refinance window for all India financial institutions, and eased overdraft rules for state governments. The RBI also increased the limit under ways and means advances (WMAs) for the central and state governments. In TLTRO 2.0 (aggregate amount of INR 50,000 crores) that was announced by the RBI on 17 April 2020, it was mandated that the funds must be invested in investment grade bonds, commercial paper, and non-convertible debentures of NBFCs, with at least 50% of the total amount availed going to small and mid-sized NBFCs and MFIs. The regulatory initiatives of the RBI include permitting commercial banks and financial institutions to provide moratorium of three months on payment of instalments in respect of all term loans outstanding as on 1 March 2020 and deferment of interest on working capital facilities for three months on all such facilities.

While the need for a large fiscal stimulus to support relief and stimulus measures is paramount, the available resources for the government appear to be highly constrained when we match the public sector borrowing requirement (PSBR) with the sources of its financing. India has stepped into the COVID-19 crisis on the back of two successive years of fiscal slippage where the central government had to provide for a countercyclical relaxation of 0.5% points of GDP each from their respective targets in FY20 (RE) and FY21 (BE). India is far more handicapped at present as compared to the 2009 crisis when we experienced five successive high growth years over the period FY04 to FY08. The average growth rate during this period was 7.9%. In FY08, the combined fiscal deficit of the central and state governments was also at its lowest at 4.1% of GDP.

As compared to the FY21 budget estimates (BE), both the central and state governments would suffer a significant revenue erosion due to the lower FY20 tax base and lower growth prospects in FY21. Factoring in the lower GDP growth and slippage in tax revenues and non-debt capital receipts as compared to BE, the slippage may amount to a minimum of 2.4% of GDP considering centre and states together. Considering an additionality of 0.3% of GDP in the relief package of INR 1.7 lakh crore announced under the Pradhan Mantri Garib Kalyan Yojana, the combined fiscal deficit may have to be increased from 6.5% to 9.2% of GDP just to meet budgeted expenditure. Providing for additional stimulus spending of 3% of GDP for the central government, 1% of GDP for the state governments, and a borrowing requirement of 3.5% of GDP by the central and state public sector enterprises (PSUs), the total PSBR is estimated at 16.7% of GDP. Against this, the available sources of financing consisting of excess savings from household and private corporate sectors (7% of GDP), savings of the public sector (1.5% of GDP) and current account deficit (1% of GDP) add to only 9.5% of GDP, leaving a significant financing gap of 7.2% of GDP. Some of the channels through which this gap may be filled up include monetization of fiscal deficit, borrowing from multilateral institutions including the IMF, and borrowing from NRIs.

b. Exit strategy: India’s first three-week lockdown which was slated to end on 14 April 2020 has now been extended up to 3 May 2020. In the month of April 2020, the economy was at a near-standstill. As and when economic activities resume, they may not normalize for a long period of time. In fact, the resumption of activities needs to be according to a well-thought out exit strategy. Different output sectors may resume activities at different pace as the health pandemic is gradually brought under control. Sectoral targeting of fiscal stimulus should be synchronized with the opening up of the relevant sectors. India’s FY21 growth would depend critically on the pace of opening up of the sectors and the extent of stimulus.

Prof. Dasgupta is an MBA( Marketing) with 23 years of  experience in Corporate and in Academics combined . He has worked In various Corporate Houses including HUL and Bisk Firm. Working in NSHM Business School(NBS) since its inception at March-2007, He is currently teaching General Marketing, Strategic Management, Retail management, Sales & Distribution Management, Retail Strategy, Pharmaceutical Marketing Management etc in MBA and PDGM courses. He has several Research Publications in his area of specialization in various Management Journals. He is having experiences in training FMCG sales techniques to sales personnel.