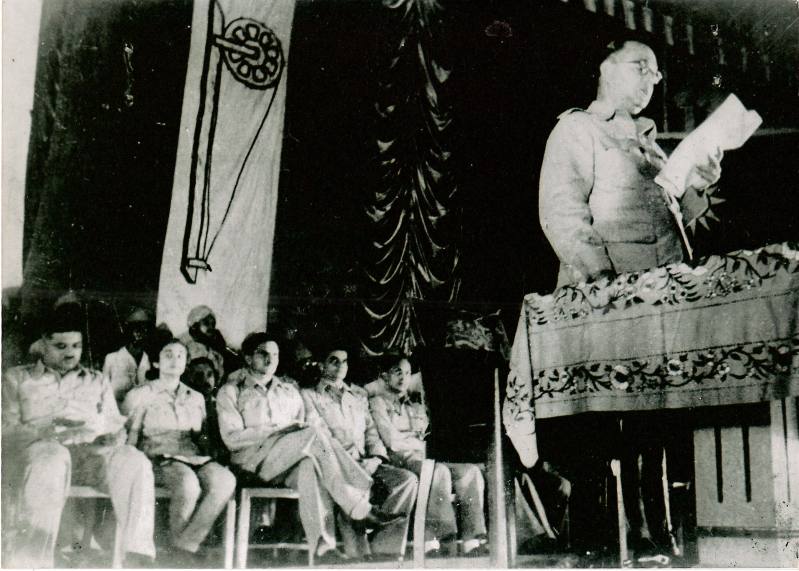 After their first defeat at the hands of the British in 1757 in Bengal, the Indian people fought an uninterrupted series of hard and bitter battles over a stretch of one hundred years. The history of this period teems with examples of unparalleled heroism and self sacrifice. And, in the pages of that history, the names of Siraj Ud Dowlah and Mohal Lal of Bengal , Haider Ali, Tipu Sultan and Vellu Tampi of South India, Appa Saheb Bhonsle and Peshwa Baji Rao of Maharashtra, the Begums of Oudh, Sardar Shay Singh Atariwala of Punjab and last, but not the least, Rani Lakshmibai of Jhansi, Tantia Topi, Maharaj Kunwar Singh of Dumrao, and Nana Sahib—among others—the names of all these warriors are for ever engraved in letters of gold. Unfortunately for us, our forefathers did not at first realize that the British constituted a grave threat to the whole of India and they therefore did not put up a united front against the enemy. Ultimately, when the Indian people were roused to the realty of the situation, they made a concerted move—and under the flag of Bahadur Shah in 1857, they fought their last war as free men. In spite of a series of brilliant victories in the early stages of this war, faulty leadership gradually brought about their final collapse and subjugation. Nevertheless, such heroes as the Rani of Jhansi, Tantia Tope, Kunwar Singh and Nana Sahib live like eternal stars in the nation’s memory to inspire us to greater deeds of sacrifice and valour.

Forcibly disarmed by the British after 1857 and subjected to terror and brutality, the Indian people lay prostate for a while—but with the birth of the Indian National Congress in 1885, there came a new awakening. From 1885 till the end of the last World War, the Indian people in their endeavour to recover their lost liberty, tried all possible methods—namely agitation and propaganda, Boycott of British goods, terrorism and sabotage—and finally, armed revolution. But al these efforts failed for a time. Ultimately, in 1920, when the Indian people, haunted by a sense of failure, were groping for a new method, Mahatma Gandhi came forward with a new weapon of non-cooperation and civil disobedience.

For two decades thereafter the Indian people went through a series of intense patriotic activity. The message of freedom was carried to every Indian home. Through personal example, people were taught to suffer, to sacrifice, and to die in the cause of freedom. From the centre to the remotest villages, the people were knit together onto one political organization. Thus, the Indian people not only recovered their political consciousness, but became a political entity once again. They could now speak with one voice and strive with one will for one common goal. From 1937 to 1939, through the work of the Congress Ministries in eight provinces, they gave proof of their readiness and their capacity to administer their own affairs.

Thus, on the eve of the present World war, the stage was set for the final struggle for India’s liberation. During the course of this war, Germany, with the help of her allies, has dealt shattering blows to our enemy in Europe—while Nippon with the help of her allies has inflicted a knockout blow to our enemy in East Asia. Favoured by a most happy combination of circumstances, the Indian people have a wonderful opportunity of achieving their national emancipation.

For the first time in recent history, Indians abroad also have been politically roused and united into one organization. They are not only thinking and feeling in tune with their countrymen at home, but are also marching in step with them, along the path to freedom. In East Asia, in particular, over two million Indians are now organized as one solid phalanx, inspired by the slogan of “Total Mobilisation”. And in front of them stand the serried ranks of India’s Army of Liberation, with the slogan “Onward to Delhi”on their lips.

Having goaded Indians to desperation by its hypocrisy and having driven to starvation and death by plunder and loot, British rule had forfeited the goodwill of the Indian people altogether and is now living a precarious existence. It needs but a flame to destroy the last vestige of that unhappy rule. To light that flame is the task of India’s Army of Liberation. Assured of the enthusiastic support of the ivil population at home and also of a large section of the British Indian Army and backed by gallant and invincible allies abroad, but relying in the first instance on its own strength, India’s Army of Liberation is confident of fulfilling its historic role.

Now that the dawn of freedom is at hand, it is the duty of the Indian people to set up a Provisional Government of their own, and launch the last struggle under the banner of that government. But with all the Indian leaders in prison and the people at home totally disarmed, it is not possible to set up a Provisional Government within India or to launch an armed struggle under the aegis of that government. It is therefore the duty of the Indian Independence League in East Asia, supported by all patriotic Indians at home and abroad to undertake this task—the task of setting up a Provisional Government of Azad Hind (Free India) and conducting the last fight for freedom, with the help of the army of liberation. (that is, the Azad Hind Fauz or the Indian National Army) organized by the League.

Having been constituted as the Provisional Government of the Azad Hind by the Indian Independence League in East Asia, we enter upon our duties with the full sense of responsibility that has developed upon us. We pray that Providence may bless our work and our struggle for the emancipation of our motherland. And we hereby pledge our lives and the lives of our comrades-in-arms to the cause of her freedom, of her welfare, and her exaltation among the nations of the world.

The Provisional Government is entitled to, and hereby claims, the allegiance of every Indian. It guarantees religious liberty as well as equal rights and equal opportunities to all its citizens. It declares its firm resolve to pursue the happiness and prosperity of the whole nation and all its parts, cherishing all the children of the nation equally and transcending all the differences cunningly fostered by an alien government in the past.

In the name of God, in the name of bygone generations who have welded the Indian people into one nation and in the name of the dead heroes who have bequeathed to us a tradition of heroism and self sacrifice—we call upon the Indian people to rally round our banner and strike for Indian freedom. We call upon them to launch the final struggle against the British and their allies in India and to prosecute that struggle with valour and perseverance and with full faith in final victory—until the enemy is expelled from Indian soil and the Indian people are once again a free nation.
Signed on behalf of the Provisional Government of Azad Hind.