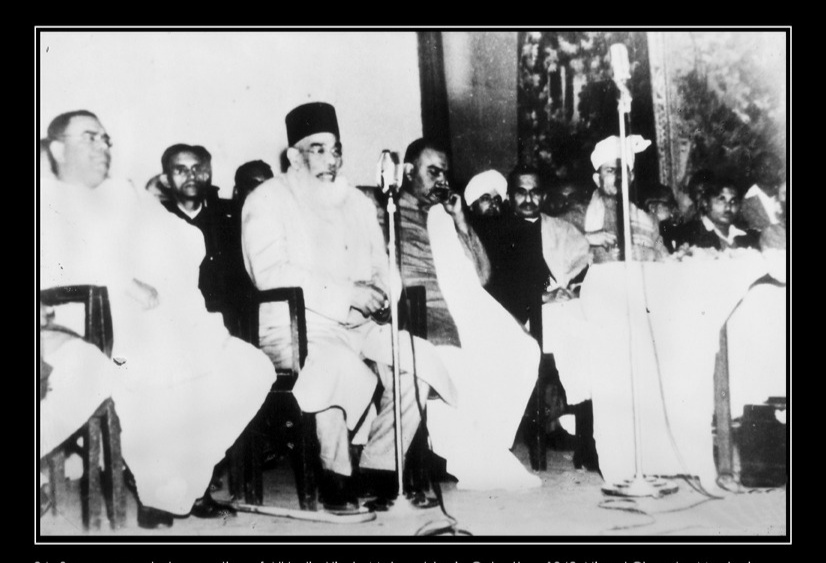 While the Congress govts resigned in the provinces in protest against India’s forced involvement in a war, the Hindu Mahasabha took a more cautious stance. It saw the war as an opportunity to militarise Hindu youth and to ensure that the freedom of the nation, when it comes, would be secured. As a result, Savarkar and many other leaders advocated for the enlistment of Hindu young men into the army; so that they can gain military training and experience from the war and serve the nation after freedom. Hindu Mahasabha leaders were prominent in many war committees. This however did not mean unalloyed British loyalty. While the Communists actively denounced the Quit India Movement and gave intelligence to the Raj; the Mahasabha leaders did individually participate in the movement. But their stance was somewhere in the middle- neither active collaboration like the communists, nor active self-destructive opposition like the Congress. This was the same attitude which prompted the Hindu Mahasabha to form governments in Sindh and Bengal with Muslim leaders in 1941-42 (not the Muslim League as is commonly presumed). The aim was to work within the system to secure Hindu interests and prevent monopolization of government patronage and public office by the Muslim League, whom the Raj was favouring unabashedly due to their sycophancy[1].

The attempt by the Muslim League to impose their agenda was clearly evident in the way they used their powers under the Act of 1935 in Bengal. This became even more explicit after the Lahore Resolution of 23rd March, 1940; which finally committed the Muslim League to the “Pakistan” demand officially. The Huq Ministry, which had been formed after Fazlul Huq joined the Muslim League and merged his KPP into it, passed a series of legislations which made it clear that total Muslim dominance was their goal. In 1938, the Fazlul Huq ministry changed the rules about police recruitment so that ‘while enlisting Bengali constables the Superintendent of Police must see that not less than 50% of the recruits are Muslims’. In the same year, the ministry passed legislation that stipulated that 60 per cent of all government appointments be reserved for Muslims. In 1939, the Government instructed local bodies ‘not to propose for appointment to local bodies persons who were known to be actively opposed to the policy of the Ministry’, and slapped administrative controls on nominations to the Union Boards, which accounted for one third of their total membership (all of whom were to be Muslims). And in 1939, the Calcutta Municipal Amendment Act reserved seats for Muslims in the Calcutta Corporation, far in excess of their proportion of the population. But the unkindest cut of all came in 1940, when the Ministry introduced the Secondary Education Bill, taking control of higher education in the province away from Calcutta University and vesting it instead in a Secondary Education Board in which Muslims were to be given a greater say. This threatened the Hindu endowed schools, both religious and secular, by exposing them to the imposition of an Islamic educational curriculum[2].

The effects of these changes soon began to be felt on the ground level, despite the vehement and united attempts by the Hindu members of the Mahasabha and the Congress in the Assembly to stall these changes. Muslim students and community leaders stopped Saraswati Puja in many schools of their localities. Even in Hindu majority districts like Burdwan and Midnapore, the Muslims began to control local bodies and made policies against Hindu religious practices and rituals. Debt Settlement Boards, set up under the Bengal Agricultural Debtors Act of 1935, were used by Muslim local body members to incite Muslim tenants and stop them from paying their rents and debts to the Hindu Zamindars and moneylenders. The anger against such policies saw an outburst in the form of the Dhaka riots of 1941. It was in such a situation that Mahasabha began to make a huge impact upon Bengal. Despite the differences between the Mahasabha and the Congress at the national level; in Bengal, there was a clever understanding and cooperation between the two. They collaborated and built-up resistance against Muslim hoodlums or gangs in many areas. Organizations like the Bharat Sevasram Sangha were roped in to mobilize cadres and achieve organizational reach. Colonial documents showed an extensive increase in the number of branches of the Mahasabha during this period. The Mahasabha achieved further prominence when, under the leadership of Shyamaprasad Mukherjee, it did stellar work in famine relief during the Bengal Famine of 1943. It prevented many Hindus who were destitute, particularly women and children, from being converted in exchange for food. The active opposition of the communists in alliance with the Muslim League against the Mahasabha’s relief efforts show the extent of their success[3].

The silent effort of the Mahasabha proved to be a godsend for the Bengali people. In the tragic period of 1946-47, Mahasabha volunteers were at the forefront of the efforts to mobilize resistance and even lead counter attacks, particularly and quite successfully in Kolkata. Shyamaprasad Mukherjee, knowing that Partition was an inevitability, started organizing a movement calling for the establishment of a “Bengali Hindu Homeland”. The Bengal Congress and the Mahasabha collaborated to hold mammoth public meetings and carry out a press campaign to convince people of the need to do this. Prominent intellectuals like Jadunath Sircar, RC Majumdar, Meghnad Saha and Suniti Chatterjee came forward to support this cause. Newspapers like Amrita Bazar Patrika were active in this cause as well. Finally, their efforts paid off when in June 1947, it was announced that Bengal would be partitioned instead of giving it over to Pakistan entirely[4].

By this time, the Mahasabha had also established a prominent presence in the Indian Princely States. In contrast to the Congress, the Mahasabha viewed Hindu Maharajas as “patriotic Indians” whose assistance will be vital for India’s freedom, Hindu causes and post-freedom reconstruction. They advocated for retention of the political power of the Maharajas even if they were to join the Union, and even drew up plans for a constitutional monarchy. Prominent Maharajas like those of Gwalior, Indore, Baroda supported the Mahasabha cause and provided them patronage[5].

However, it would be a gross mistake to see Mahasabha as merely a regressive, feudal party. The “Free Constitution of Hindusthan” that the Mahasabha drew up in 1945 proved the visionary nature of its leaders, and the final Indian Constitution that came into being in 1950 matched it in most respects. This shows that the Mahasabha, by 1947, had clearly become a formidable force in Indian politics. The Mahasabha leaders like Mukherjee were given Cabinet posts and they even contributed extensively to the Constituent Assembly discussions. The refugee crisis thrown up by the Partition in 1947 provided them an even greater recognition for their relief work among the Hindu and Sikh refugees and their mobilization in order to resettle them in lands left behind my feeling Muslims.

This is when, however, the downturn in its fortunes started. Angered by the constant Muslim appeasement of Gandhi and his insensitivity towards refugees from Punjab, Nathuram Godse and Narayan Apte- both involved with the Mahasabha-assassinated him on 30th January, 1948. The Congress Government lost no opportunity in not only arresting the perpetrators but branding the Mahasabha and the RSS itself as guilty. Leaders like Savarkar had to stand trial. RSS offices were attacked throughout the country and many were even killed. Marathi Brahmins were killed just because the community was more prominent in the RSS-Mahasabha groups. This chain of events culminated in a ban placed upon on the RSS. Even though the ban was taken off after a year and the Hindu Mahasabha still continued as a party (with leaders like Mukherjee still in the Government), the disgrace of Savarkar had dented the whole organization; even though he was acquitted of the charges of conspiracy. Ultimately Mukherjee himself felt that the organization was not doing enough to represent non-Hindus and left the organization, to form his own party. He also advised the organization to stay politically inactive in the aftermath of Gandhi’s murder, which contributed to its further decline. Later Mukherjee formed the Bharatiya Jana Sangh (precursor of the present Bharatiya Janata Party) with the help of the RSS. The Hindu Mahasabha as an organization continues to exist till this day, but with almost nothing constructive to show as its performance or achievement.[6]

However, despite the sudden and unfortunate demise of this organization in the late 40’s-early 50’s, it had to its credit a lot of achievements which performed yeoman service for Hinduism and the Hindu community. The example of this organization should continue to inspire organizations and forces working for the cause of Hindu renaissance and nationalism.

(Author: Sri Sukrit Banerjee, at the moment, is pursuing MA in History from JNU. Originally hailing from the city of Kolkata, Sri Banerjee is interested in a host of subjects, Indic civilization in particular)