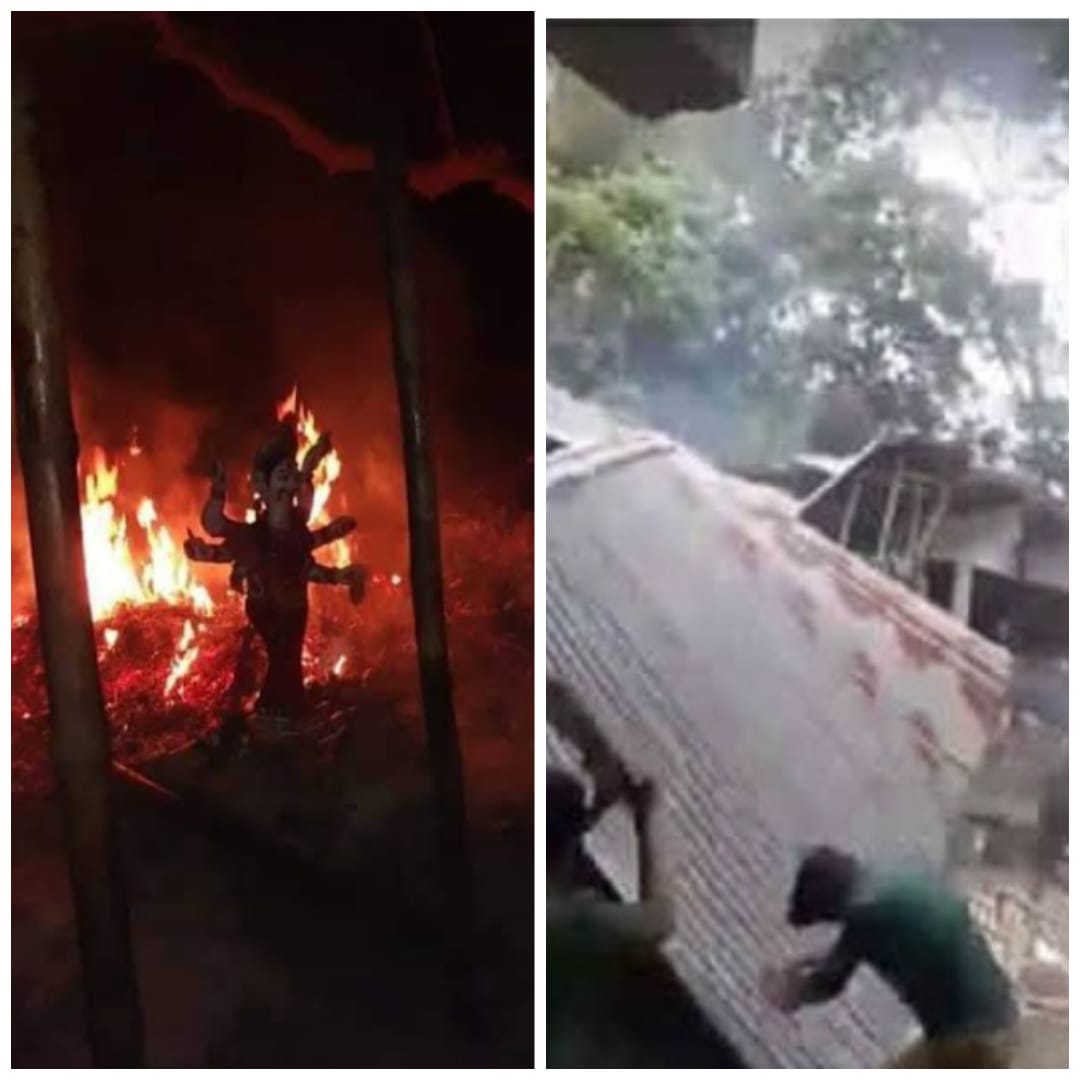 Subject: Earnest Appeal to succour Hindus in the neighbouring country of Bangladesh 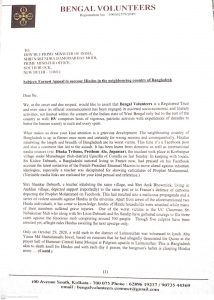 We, at the onset and due respect, would like to assert that Bengal Volunteers is a Registered Trust and ever since its official commencement has been engaged in assorted socio-economic and literary activities, not limited within the corners of the Indian state of West Bengal only but to the rest of the country as well. BV comprises hosts of vigorous, patriotic activists with experiences of decades to better the human society in each and every spirit.

What makes us draw your kind attention is a grievous development. The neighbouring country of Bangladesh is up in flames once more and certainly for wrong reasons and consequentially, Hindus inhabiting the length and breadth of Bangladesh are its worst victim. This time it’s a Facebook post and also a comment that led to the assault. It has been learnt from domestic as well as international media sources (viz. Dhaka Tribune, Prothom Alo, Jugantar), the incident took place at Korbanpur village under Muradnagar (Sub-district) Upazilla of Comilla on last Sunday. In keeping with locals, Sri Kishor Debnath, a Bangladeshi national living in France now, had praised on his Facebook account the latest initiatives of the French President Emanuel Macron to move ahead against inhuman ideologies, especially a teacher was decapitated for showing caricatures of Prophet Muhammad.    (Veritable media links are enclosed for your kind perusal and reference.)

Shri Shankar Debnath, a teacher inhabiting the same village, and Shri Anik Bhowmick, living in Andikut village, depicted support (reportedly) to the same post or to France’s defence of cartoons depicting the Prophet Mohammed on Facebook. This had resulted into a malicious propaganda and a series of violent assaults against Hindus in the environs. Apart from arrest of the aforementioned two Hindu individuals, it has come to knowledge, hordes of Hindu households were smashed while many of their members suffered grave injuries.  One of the worst victims is the UC Chairman Sri Nabakumar Shib who along with Sri Liton Debnath and Sri Sandip have gathered courage to file three cases against the ferocious mob comprising around 500 people.  Though five culprits have been arrested yet, affright rules Hindus awaiting the next upsurge only. 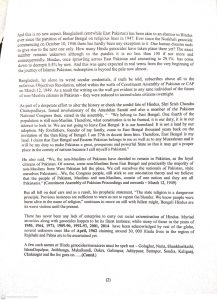 Only on October 29, 2020, a wild mob in the district of Lalmonirhat was witnessed to lynch Abu Yunus Md Shahidunnabi Jewel, based on rumours that he had allegedly desecrated the Quran at the prayer hall of Burimari Central Jame Mosque at Patgram upazila in Lalmonirhat. This is Bangladesh akin to death knell for Hindus and with each day it passes, the hangman’s halter is clasping Hindus more. …..

And this is no new aspect. Bangladesh (erstwhile East Pakistan) has been akin to an abattoir to Hindus ever since the partition of earlier Bengal on religious lines in 1947. Ever since the Noakhali genocide commencing on October 10, 1946 there has hardly been any exception to it. One human disaster ends to give rise to the next one only. How many Hindu genocides have taken place there yet? The exact number remains unknown although to the pundits it is no less than 100 if not more and consequentially, Hindus, once sprawling across East Pakistan and amounting to 29.1%  has come down to decrepit 8.5% by now. And this was quite expected in real terms from the very beginning of the journey of Islamic Pakistan; redemption is beyond the pale now almost.

Bangladesh, let alone its weird secular credentials, if truth be told, subscribes above all to the nefarious Objectives Resolution, tabled within the walls of Constituent Assembly of Pakistan or CAP on March 12, 1949. As a result the writing on the wall got evident to any sane individual of the future of non-Muslim citizens in Pakistan – they were reduced to second-class citizens overnight.

As part of a desperate effort to alter the history or check the sordid fate of Hindus, Shri Srish Chandra Chattopadhaya, famed revolutionary of the Anushilan Samiti and also a member of the Pakistan National Congress then, stated in the assembly, “  “We belong to East Bengal. One fourth of the population is still non-Muslim. Therefore, what constitution is to be framed, it is our duty, it is in our interest to look to. We are not going to leave East Bengal. It is our homeland. It is not a land by our adoption. My forefathers, founder of my family, came to East Bengal thousand years back on the invitation of the then King of Bengal. I am 27th in decent from him. Therefore, East Bengal is my land. I claim that East Bengal and Eastern Pakistan belongs to me as well as to any Mussalman and it will be my duty to make Pakistan a great, prosperous and powerful State so that it may get a proper place in the comity of nations because I call myself a Pakistani.” 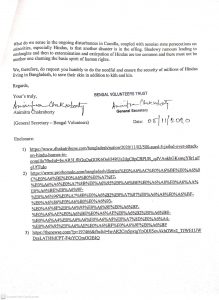 He also said, “We, the non-Muslims of Pakistan have decided to remain in Pakistan, as the loyal citizens of Pakistan. Of course, some non-Muslims form East Bengal and practically the majority of non-Muslims from West Pakistan left the place. We call ourselves the nationals of Pakistan, style ourselves Pakistanis…We, the Congress people, still stick to our one-nation theory and we believe that the people of Pakistan, Muslims and non-Muslims, consist of one nation and they are all Pakistanis.” (Constituent Assembly of Pakistan Proceedings and onwards – March 12, 1949)

But all fell on deaf ears and as a result, his prophetic statement, “The state religion is a dangerous principle. Previous instances are sufficient to warn us not to repeat the blunder. We know people were burnt alive in the name of religion,” continues to move on still with fullest might, Bengali Hindus are its worst victims until the present.

There has never been any lack of enterprise to carry out racial extermination of Hindus. Myriad atrocities along with genocides happen to be its finest instance; while many of those in the years of 1950, 1964, 1971, 1989-90, 1992-93, 2001, 2014  have been acknowledged by rest of the globe, several unknown ones like of April, 1962 claiming around 30, 000 Hindu lives in the region of Rajshahi and Pabna are to be ascertained yet.

What do we sense in the ongoing disturbances in Comilla, coupled with aeonian state persecutions on minorities, especially Hindus, is that another disaster is in the offing. Shadowy rumours leading to onslaughts and then to extermination and extirpation of Hindus are too common and there must not be another one shaming the basic spirit of human rights.

We, therefore, do request you humbly to do the needful and ensure the security of millions of Hindus living in Bangladesh, to save their skin in addition to kith and kin.